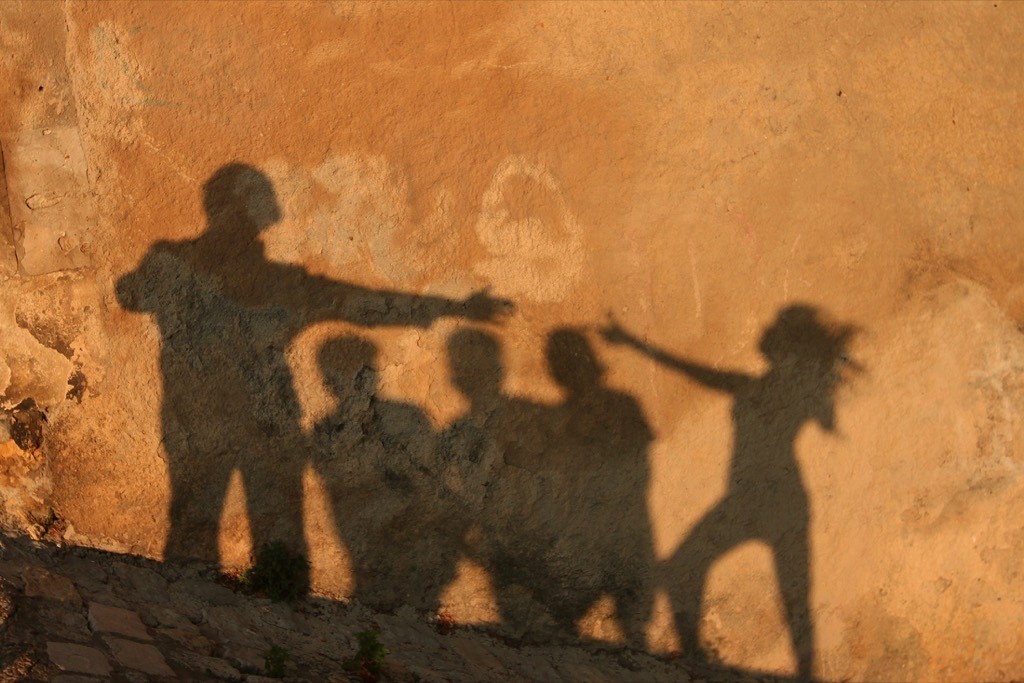 Since lock-down began, I have lived the shift from IRL to virtual facilitation like the loss of a limb. We can still create useful conversations; we can still get the work done. But ‘remarkably good’ isn’t nearly good enough for me.

My awareness of the constraints of our new two-dimensional reality makes me wonder about less-obvious limitations in our former (and future) three dimensions. The 15 inches of my Zoom screen have no room for the depth of emotion and engagement that even casual human interaction can provoke in our face-to-face work. But if two dimensions are insufficient, how can I be certain that three dimensions are enough? What kind of transformational whirlwind would we master if we could inhabit further dimensions? What would those dimensions feel like?

In his ‘Cave’ parable, Plato imagines people chained to the wall of a cave, only able to see the projected shadows of people who are otherwise out of view. Their entire life experience is of this two dimensional shadow world and they have never seen the three-dimensional people casting these shadows. One of these people leaves the cave and, though initially dazzled by the sun, eventually discovers the third dimension. Returning to recount the wonders of the third dimension, the others are not only unable to understand the tale of a three-dimensional world, in their disbelief, they murder the teller.

An 1884 novella, Flatland, by Edwin Abbott posits a comparable scenario: Two-dimensional characters visit a one-dimensional world and are threatened with death. They are then visited by three-dimensional beings, which they can only perceive incompletely.

Given the Covid restrictions, I find myself a three-dimensional facilitator in a two-dimensional world. Two dimensions are sufficient for all sorts of work, but news of the missing dimension isn’t always welcome. We can’t go there, so let’s make the best of what we have.

Perhaps the three dimensions we recall from before the lockdown aren’t all the dimensions there could be in a collaborative experience. Can we imagine facilitating in four dimensions? Five? Each additional dimension reveals the incompleteness of our understanding before the new dimension was available to us.

Perhaps we are already familiar with some of these extra dimensions. One dimension we are all familiar with is team dynamics. Why is the capability of a team so much greater than the sum of the capabilities of the individuals who make up that team? We see tangible evidence of this extra dimension every time we witness a team’s discussion shift into a flow – that magical moment when ideas seem to emerge from the conversation itself rather than from any individual; when insights don’t move forward one step at a time, but rather roll down a hill, acquiring meaning and energy and acceleration as more perspectives pile on to the initial catalytic comment.

I have experienced this conversation-transformed-to-flow countless times. For example, in a workshop in Cairo with the World Food Programme, we were working on supporting countries to develop self-sufficiency from food crises. The discussion began in a linear fashion, with participants sharing their own perspective and commenting on each others’ contributions. But soon radically new ideas began to emerge in quick succession – each new idea building on the previous ones but at the same time emerging from a shared ambition and an implicit understanding of the potential for good that was within our grasp. In less than 30 minutes, a whole new strategy emerged – no one could say from whom or through what logical process – that, in the subsequent months, transformed WFPs approach to resilience.

I have yet to experience ‘flow’ in a virtual workshop and it only emerges occasionally during in-person workshops. When it does happen, this additional dimension opens whole new perspectives, it creates powerful memories, and it leaves us hungry to access this dimension more frequently.

A powerful tool for accessing these additional dimensions is graphic facilitation, or scribing. Listening to what is in the room – or what could be – and creating a visual space for it, introduces a dimension to collaboration that eludes a simple conversation.

Visuals – or more frequently, the act of listening, judging, and creating a visual record, in real time – provides a glimpse into another dimension of group dynamics that can transport collaboration beyond discussion into a realm of shared understanding and creation.

Eleven years ago, facilitating a workshop in Addis Ababa for Oxfam, we had a large participant group which we feared would have difficulty collaborating or of even communicating. Participants hailed from four different language groups with a few participants speaking more than two of them. The power dynamics were potentially paralyzing, mixing senior government officials with illiterate farmers.

Using a simple drawing of the water value chain, we created a conversation about water rights that spanned the language dimension and created collaboration where none was possible before.

The graphics that enabled an essential conversation surely came from another dimension – one we visit even when all our participants ostensibly speak the same language. They mimic dialogue in three dimensions, but the additional dimensions we bring transform simulation into understanding.

Another dimension we help our participants visit is simple humanity. Being a participant can involve playing a stylized role with attendant behaviors and taboos. Occasionally, we manage to push past this role and uncover a deeper humanity defined by our integrity. This additional dimension, once unlocked, reveals us for who we are, which is both transformational and terrifying.

As a child, my son once had a nightmare in which words lost their meaning. In three dimensions, this happens all too frequently. We introduce a dimension in which words mean the same thing for everybody. This is a dimension we have difficulty imagining until we visit it.

My proposed design included a module in which, in trios, participants would tell one another of when they, personally, had betrayed someone and caused lasting pain. To set an example of integrity, I would introduce the work by telling a true story of pain I had caused through a betrayal of my own.

Though they didn’t murder me, the way Plato’s cave dwellers would have, this additional dimension clearly caused them great distress and I was removed from the project. The extra dimension is not always welcome.

As my colleague Chip Saltsman says, “Find the fear and go there.” Frequently that is precisely where we will reveal an extra dimension to our work and to our client’s world.

Though I bemoan the loss of our third dimension and the temporary relegation to two-dimensional Zoom-world, I remember that however many dimensions we have to work with, there are always further dimensions, frequently just out of view, that are awaiting discovery.

Dan is the author of From The Front of the Room: Notes on Facilitation for Experienced Practitioners (only available on Kindle until the COVID crisis passes).